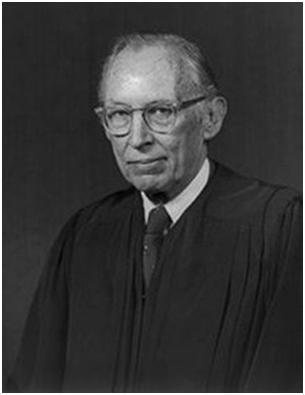 Justice Powell’s career and achievements seem almost mythical. His devotion to public service is not likely to be repeated.

He graduated first in his class from Washington & Lee University in 1929. Two years later he completed the law school curriculum at Washington & Lee and again graduated first in his class. A year later he earned a master of law degree from Harvard Law School. Turning down an offer from the Davis Polk firm in New York, he returned home to Richmond, Virginia, to start building a law practice. He dominated the legal scene in Richmond for decades.

When the United States was forced into World War II, Justice Powell was already a partner in the largest law firm in the Commonwealth. He was also thirty-four years old and the father of two small children. His age and family situation exempted him from the draft. Nevertheless, he volunteered for armed service to his country. He joined the intelligence branch of the US Army Air Forces, entering as a first lieutenant. By the end of the war, he had participated in the very highest levels of air force intelligence. He was one of twenty-eight officers responsible for managing the use of the “Ultra” intelligence the allies had secretly deciphered from the German “Enigma” machine. At the end of the war, he returned home with the rank of full colonel and a chest full of medals, including the Legion of Merit and the Bronze Star.

Justice Powell was a pioneer in pro bono services to the poor. Early in his career, he volunteered his services regularly at the Legal Aid Society of Richmond. As president of ABA, he established the Legal Services Program.

In addition to his long service to the legal profession, Justice Powell continued to devote his efforts to his nation and state. He served as a member of President Johnson’s Commission on Law Enforcement and the Administration of Justice, on President Nixon’s Blue Ribbon Defense Panel, on the National Advisory Committee on Legal Services to the Poor, and on the Virginia Constitutional Revision Commission.

In September 1971, he turned sixty-four. He had achieved more than most lawyers could even imagine. He was at an age when most would be considering retirement. He had never been a judge and had twice discouraged the Nixon administration from asking him to consider service on the United States Supreme Court. But President Nixon knew Lewis Powell’s heel. In October 1971, the president personally called Powell and told him it was his duty to his country to serve on the US Supreme Court. He acquiesced. On January 7, 1972, he was sworn in as the ninety-ninth justice of the US Supreme Court. He retired from active service as a justice on June 26, 1987.

Justice Powell established himself on the court as the consensus maker. His analyses were precise and his opinions clear. During his fifteen years on the bench, between his sixty-fifth and eightieth years, Justice Powell authored more than six hundred opinions, almost half of which were issued on behalf of the court. And when he retired a few months before his eightieth birthday, he was not through. He sat as an extra judge, primarily serving on the United States Court of Appeals for the Fourth Circuit. When he served on a three-judge panel of the Fourth Circuit, this former associate justice of the US Supreme Court declined to preside and in bench conference declined to cast his vote either first or last. He chose to vote second, to hold up the middle ground, to build the consensus and not dictate it.